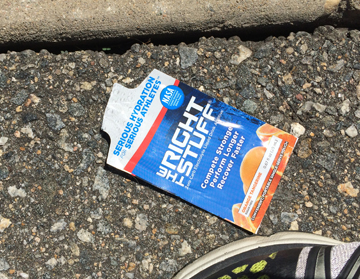 The Secret to Ironman Success!

The day after another disappointing, cramp-hampered Ironman World Championship in Kona, Hawaii, George Robb was walking down Mauna Lani Drive when he noticed an empty packet labeled The Right Stuff that someone had tossed on the ground. Intrigued, he conducted some online research and discovered that the NASA-developed formula contained sodium citrate which might solve his decade-long frustration where high-quantity consumption of salt pills had failed.

“My Achilles Heel has always been cramping in the marathon of the Iron Man,” says Robb, 54, who has qualified for the Ironman championship since 2006. “I always got a cramp in my quad and I thought it was fatigue from cycling. I would get myself into incredible cycle shape and it would still happen 10 miles in to the marathon – I can remember the spot in Hawaii where it always happened. I’m pretty competitive. I would have been top three in my age group if I had not been ground to a halt by debilitating pain.”

The Right Stuff solved his cramping problem, which also shored up in his swimming, and energized his cycling. “I was talking about having to quit swim practice or slow down because of these cramps,” he says. “All of a sudden that’s gone. We’d go on these long bike rides and I’d take bottles of water with one packed of The Right Stuff in each water bottle on these long rides and I wouldn’t need as much nutrition or carbohydrates. What I thought was the depletion of calories was actually the onset of dehydration. I don’t have to eat like a horse on these long rides.”

What I thought was the depletion of calories was actually the onset of dehydration.

Robb and his wife, Linda Neary, a multiple champion triathlete herself, both recommend The Right Stuff at their Tri Bike Run store on US1 in Juno Beach, Fla., and customers come back for more. George is competing in two Ironmans this year, hoping to qualify for Kona again now that he’s solved his cramping problem with The Right Stuff. “There’s nothing like it,” he says. “I’m a heavy sweater, and I lose a lot of water when I work out. Anyone who is a super sweater should definitely use this. That stuff really works.”