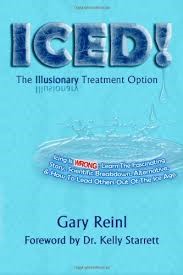 A Different Perspective for Athletes to Consider: Don’t Ice for Recovery

Distance runner Gary Reinl’s meticulous reporting destroyed the long-held practice of rest and ice for healing injuries, restoring the natural course of healing by the inflammatory response assisted by muscle activation – the intuitive “walk it off” order of coaches in his childhood. His insistence on scientific evidence also makes him a user and advocate of The Right Stuff hydration formula developed by NASA.

Reinl, 63, who started running in the 1960s on water and sometimes salt tablets, remembers a nearly 70-mile run from Philadelphia to Ocean City, N.J., in the summer of 1971 wearing Converse sneakers and sipping water from front-yard hoses on the route.

“Everything we did was wrong,” he says. “I’ve done it wrong, and I’ve done it right, and I’m certain that doing it right is way better.”

When it comes to treating injuries, doing it right is the opposite of conventional wisdom that held sway for decades under the popular acronym RICE – Rest, Ice, Compression, Elevation. Reinl’s relentless research found support for the approach, and Dr. Gabe Mirkin, who coined the term in 1978, recanted in the foreword to Reinl’s 2014 book Iced! The Illusionary Treatment Option.

“We have begun to shift the conversation. We’re shifting it to muscle activation to solve the problem,” says Reinl, who represents an electro-muscle stimulation device, MARC PRO® (Muscle Activated Recovery Cascade), that promotes muscle activation. “Why would you put ice on damaged tissue? People believe it reduces swelling. It doesn’t reduce swelling. It actually increases swelling. Your immune system knows how to handle it. That’s why it sends fluid to the damaged area. Why would you try to reduce the amount of fluid sent to the damaged site?”

Ice slows the natural repair process by shutting off signals between muscles and nerves. Inflammation is a necessary part of the healing process as the body rushes blood and nutrients to the area, and muscle activation helps flush out the extra fluids through the lymphatic system. “The last thing you’d want to do is restrict swelling coming to the area,” Reinl says. “You do want the fluid to come. What you don’t want it to do is accumulate and settle.”

In fact, the delay caused by icing can suffocate healthy cells that would not have died as a result of the injury, a secondary cellular death that Reinl calls “negligent homicide.”

Reinl traced the origins of the “Ice Age” to 1962, when a physician successfully reattached the arm, preserved on ice, of a 12-year-old who was injured while jumping a train in Massachusetts. The story became a sensation, and people mistakenly associated ice with healing. “The intent of putting the severed body arm on ice was to preserve the severed body part,” he explains. “It had nothing to do with damaged tissue; it had to do with managing a severed body part.”

After Mirkin published his RICE approach in 1978, soccer moms everywhere kept nifty snap-and-chill ice packs in their pocketbooks. Athletic trainers, who became common on sports teams in the 1980s, could not perform medical procedures but could legally apply ice. Even after Medicare, recognizing the lack of evidence, stopped reimbursing for ice treatments in physical therapy clinics, the practice thrived in sports.

Reinl has worked with athletic trainers and physical therapists from more than 80 professional teams and other elite athletes who have stopped or reduced their use of ice, although some star athletes still insist on the old approach.

These days, Reinl, whose lifetime running total is above 50,000 miles, lives in the Las Vegas desert and routinely runs 10 miles through a canyon where temperatures can exceed 113 degrees. He preps with a pre-run dose of The Right Stuff and takes another packet for each hour on the road when he returns, ensuring that his body chemistry remains optimal for tissue regeneration and recovery.

“You know how good you feel from it,” he says, adding that his son, a lawyer, rejects all other

supplements but adopts The Right Stuff regimen. “I can go out and run 20 in the desert and I’m perfectly fine. I carry a couple of gallons of water with me. I stay fully hydrated on my runs.”

He recommends The Right Stuff to runners, endurance athletes, military personnel, and even golfers who spend long hours in the hot sun. You can check out the science behind The Right Stuff.        [Editors Note: links to NASA studies can be found on the brand’s website at http://tiny.cc/TheRightStuffStudies]