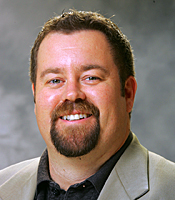 Kevin Kacer chose to attend Indiana Central University, now the University of Indianapolis, because he figured he’d get more experience as a student athletic trainer at the small school. He was right.

“I was the only student trainer there my freshman year,” says Kacer, who had seen programs with dozens of students at Purdue University and Indiana University. “It was a small Division 2 school. I knew I would get a lot of experience early in my collegiate career. I was traveling with the football team, I had the baseball team, I did wrestling and basketball.

I wanted to be an athletic trainer

“I knew when I was in high school that I wanted to be an athletic trainer,” he says, adding that his high school coach and athletic director sent him to summer camps for trainers. “I played sports growing up. I came to that realization that I wasn’t going to go much further playing sports, but I liked it and I liked helping people.”

Kacer earned his degree in physical education and, with his extensive experience, passed a national exam to become an athletic tra

“I have everything to do with the health and safety of the players,” he says. “I manage all of their injuries. I’m the guy that takes care of their first aid needs, emergency needs. I’m that first responder when something happens to one of our players. Their health and safety is my No. 1 concern. I’m doing what I wanted to do.” Kacer is a member of the Professional Hockey Athletic Trainers Society (PHATS) , National Athletic Trainers’ Association (NATA), and American College of Sports Medicine (ACSM).

I’ve grown to use The Right Stuff for a lot more of my guys that are chronic sweaters.

A few years ago, he suggested The Right Stuff to a goalie who is a heavy sweater. “And, now he uses it religiously,” Kacer says. “He loses a lot of water weight both in practice and in games. It became a problem with him, getting dehydrated and losing that edge.  (Editor’s Note: Studies show hockey players are some of the heaviest sweaters among team sports athletes; e.g., 3+ L/game) .  I’ve grown to use The Right Stuff for a lot more of my guys that are chronic sweaters. They get overheated and lose that edge. It’s a very, very physical, demanding sport. Our games are usually two plus hours. It’s a pretty good aerobic sport.  The Right Stuff has been helping our team for a few years now!”