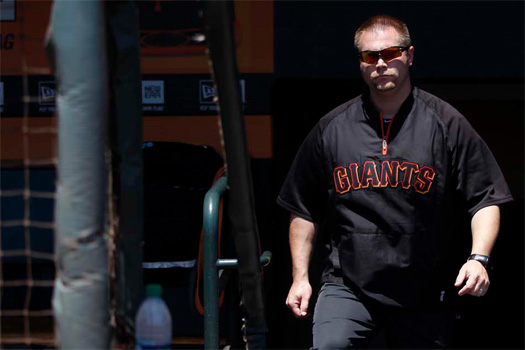 The World Champions, who adopted the NASA-developed product, as an important part of their hydration program more than two years ago, consumed as much of The Right Stuff in this year’s Spring Training as all last year’s regular season as players became more familiar with its benefits.

The Importance of Hydration

“Hydration is a huge component of performance as well as recovery,” Kochan says.

In addition to the challenges of practice and games, the Giants need regular hydration for their long flights to East Coast and Midwest opponents. They are among the most-traveled MLB team, and hours in dry airplane air require regular moisture replenishment.

“There’s evidence-based research out there that not just athletes but everyday people flying can need eight ounces of water for every hour in the air,” Kochan says. “With our rigorous travel schedule, some guys are not doing the best of their ability to eat properly as pertains to performance.”

Players can turn to The Right Stuff before, during, and after the practice or game for that extra boost.

Sweaty destinations, especially during the summer months, also can remove more water and nutrients than players restore with ordinary eating and drinking. Players can turn to The Right Stuff before, during, and after practice or games for that extra boost. The product is available to the whole team, and individuals choose when to use it.

“It changes each day because guys’ hydration levels change each day,” Kochan says “The ultimate goal is to educate each player. You do your best as part of a medical staff to educate players so they can make a good performance nutrition decisions. They need to get their electrolytes balanced for the best performance on the field. If they’ve thought about that, we’ve done our job.”

As part of a comprehensive nutrition and hydration program, The Right Stuff helps players feel well-prepared for play rather than sluggish and lethargic, Kochan says.

[Editors Note: The Right Stuff is not another sports drink, it is serious hydration for serious athletes™.  The company participates in the NSF Certified for Sport program, so every batch is independently tested and cleared not to contain any banned substances, heavy metals or other adulterants.]