Running Races and Winning (Ultra-distances) for Women Over 60

Linda Quirk wants to see how far she can go to demonstrate the vitality of over-60 women in ultrarunning. Quirk, 62, ran the L.A. Marathon, 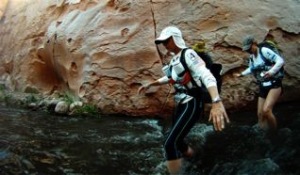 her first, when she was 35 with no prior experience in 5K or 10K. She was hooked and ran many more marathons including Big Sur and Alaska’s Midnight Sun Marathon. At the age of 45, she took up Ironman, with help from a coach, on a challenge from her oldest son.

“I fell in love with Ironman and participated all the way through qualifying for Kona,” says Quirk, who recovered from a biking accident and qualified for Kona in 2008 at Lanzarote in the Canary Islands when the first-place finisher declined the spot.

“Things fell into place for me,” she says. “It was obviously meant for me to go to Kona. “Having reached the pinnacle of my triathlon career at Kona, I hung up the bike. It was time for me to plant my feet back on the ground.”

my feet back on the ground

In 2010, she completed a plan to run a marathon on every continent, then took up the challenge of becoming the first woman to complete RacingThePlanet’s 4 Deserts Race Series (Editor’s note: 2015 races include the Gobi, Sahara, Atacama and The Last Desert [Antarctica]). The races are the world’s leading rough-country endurance footraces, each taking place over seven days and 250 kilometers (over 150 miles) in the largest and most forbidding deserts on the planet. Competitors must carry all their food, clothing and gear on their back while the organizers provide water and a multi-person tent at night. Quirk and two other women completed the series. Samantha Gash from Australia took first woman and youngest; Quirk took second, becoming the first American woman and oldest person ever to complete the series; and Lucy Rivers-Buckley placed third, becoming the first woman from the United Kingdom. At the time, Quirk was 57 and Gash was 27.

“I did take the first American woman to ever do it and the oldest person to have done it,” says Quirk, who still holds that record. “That was a great experience. I loved every desert. They were difficult and challenging but beautiful places to be.”

She discovered The Right Stuff in the Gobi Desert, the second race in the series, after losing track of her salt pills in the first race. She placed sixth among women overall.

“I said I need something I can just put in my water and drink and not have to think about how many tablets I take,” she recalls. “I’m telling you, it was amazing for me. I took about four ounces every 20 minutes or so.”

Since then, she’s depended on The Right Stuff in training as well as ultramarathons, including the Brazil 135, the Ultra-Trail du Mont-Blanc, and Badwater, where she holds the 60-to-69 record.

“I don’t go without it because it works so well,” she says. “I don’t have to think about what I’m putting in my body or how much. It replaces a lot of what’s depleted.”

Quirk, who ran in this year’s Brazil 175 but stopped at 100 miles because the 60-hour limit was out of reach, says she aims to keep up her participation. While some men older than 60 have continued to run ultramarathons, few women have blazed such a trail.

“I enjoy pushing and seeing how far I can go,” she says, adding that she has paid close attention to nutrition in recent years to sustain the effort. “I hope to show that women don’t have to stop. I try to push the envelope as long as my body is allowing me to.”