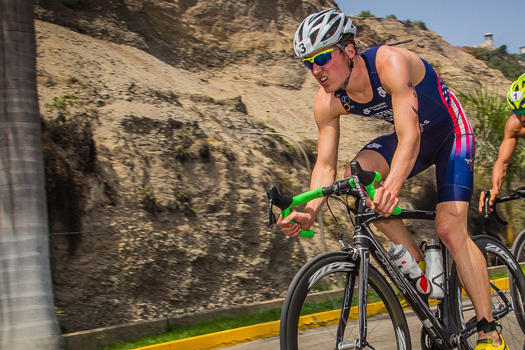 William Huffman’s triathlete career dates back to his childhood days when he would ride his mountain bike alongside his father on recreational runs. They ran their first 5K together when William was 10.

Dreaming of the Olympics

“At that point, I knew I wanted to be a runner,” says Huffman, who joined the cross-country team in middle school, then took up competitive swimming to stay in shape after an injury in high school. “I stuck with those two sports. I had two of the three down for triathlon. All that while, I always dreamed of the Olympics but knew it was pretty unrealistic until I did my first triathlon. I didn’t know until after my second triathlon that it was even an Olympic sport. Once I found that out, I knew I had to give my dream a chance. I earned my pro card during my second triathlon in 2010 and have been racing professionally pretty much since then.”

Huffman, 21, is now ranked in the top 80 triathletes in the world and the top six or seven in the United States. He was champion in the Under-23 Nationals in 2013 and 2014, champion in the Under-23 Pan America, and bronze in the Elite Nationals. Since late 2011, he has been coached by Greg Mueller, based in South Bend, Ind. He met Mueller at an Olympic training center camp and sought him out a year later, when he decided to get a new coach after a year with Dallas-based coach Sean Thompson set him on track for a career.

“I knew pretty quickly after reaching out to him that it was a good match,” Huffman says. “Personal connection is a huge part of a coaching relationship. Greg is great at checking in to see how I do and reading what’s best for my body day to day. I wake up and check in with him, and he tells me what the plan is. You have to embrace the lifestyle that comes with triathlons. I say I’m from Dallas, but in reality, I’m out of the suitcase most of the time.”

He’s spending the summer in South Bend, after a winter training camp in Nevada. Mueller chooses practice locations tailored to the environment of upcoming races – Texas, for example, when the competition is in a hot climate. Huffman is aiming for the 2016 Olympics in Rio de Janeiro, but he expects he has a more realistic shot at the 2020 Olympics in Tokyo.

“I’ve come a long way in the past five years I’ve been doing the sport,” he says. “I still have a long way to go. The Olympics is really the pinnacle of the sport. You have to be the very best to compete on that stage. That’s my goal and that’s what I’m shooting for. I’m not quite at that point, but that’s what gets me up every morning and motivates me to be my best. Most people don’t peak until their later 20s in this sport. I have plenty of years ahead of me.”

Huffman struggled with hot-weather races until a running specialist in Boulder, Colo., recommended The Right Stuff® (NASA-developed electrolyte drink additive) in 2012. He introduced it to Mueller, who has shared it with other athletes.

I was amazed at the technology behind it (The Right Stuff) and the science.

“I could not get hot weather races down,” he says. “I’d get tunnel vision, I’d get dizzy, I’d be really slow in those races, especially the longer they went on as I got into the run. They just never went well.

I was amazed at the technology behind it and the science (Editor’s Note: Summaries and links to numerous NASA-published studies are available at www.TheRightStuff-USA.com) . Since then, hot weather races are my favorite ones to target. I just feel a phenomenal difference in endurance and strength in hot weather.

“I’ll use the product the night before and 3 hours before with water. If I do that adequately, I’m set for the race; I’m good to go. I just have some water, and I don’t even need that much of that. I don’t end up as thirsty during the race. I don’t get as hot. I have better thermal regulation. I feel stronger. I can breathe more easily. It’s just incredible the difference I feel. It’s like rocket fuel.”