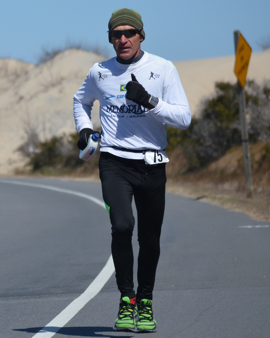 Valmir Nunes has been running ultra-distance races [Editor Note: Ultra-distance races are longer than 26-mile marathons, typically 50-100 miles and longer] for nearly half his life, starting at age 26 after battling back from a debilitating disease when he was 18. The globetrotting Brazilian has won races from the United States to The Netherlands to Greece. He has set world records and still holds the South American and Brazilian Ultramarathon records, as well as the record in the 135-mile Badwater Ultramarathon in Death Valley.

“I became interested in running when I was 16 years old,” Nunes says “My first experience was a 100-meter race and another 1,500-meter race in school. What attracted me to running ultras was that I always liked exercising. I never really got tired from running; it was never too much. Running ultras gave me the opportunity of running for long period of times. I like being a professional runner because I have been all over the planet and I have friends from all different parts of the world. I have been through many things in my life, but my passion for running has helped me overcome all the obstacles.”

…my passion for running has made me overcome all the obstacles

Nunes won the 1991 world championship in the 100-kilometer race in Italy and the USA National 100 Kilometer Championship. In 1995 in The Netherlands, he set a world record in the race that stood until 1998. Nunes won the 153-mile Spartathlon in Greece [Editor Note: this race takes a similar path to the one Pheidippedes ran when seeking help during the Battle of Marathon] in 2001 and the Badwater 135 (217 Km) from Death Valley up Mt. Whitney in 2007, in 114° heat in his time of 22 hours 51 minutes 29 seconds, the first time the race had been completed in less than 24 hours. More recently, he won the 170.1-mile (274 Km) 24 Hours in Taiwan and the 24 Hours in Croatan in Croatan National Forest in North Carolina.

“The first time I ever saw The Right Stuff

was in a running packet I received in a race in the United States,” Nunes says. “I used it, and I really liked it. The Right Stuff helps me stay hydrated and as a positive consequence it helps me with my resistance – which is very important when running long distances – and lowers my heart rate.”

“What attracted me to start coaching other people was the idea of teaching others what I had learned through my experiences,” he says. “It is very important that runners learn how to pace themselves; how to keep hydrated before, during and after races; how to be mentally prepared to enter a competition; how much to train – and to understand that we all have good and bad times during a competition.”

Nunes, who published a book on ultrarunning in Portugese in 2010, also recommends The Right Stuff to the runners that he coaches.