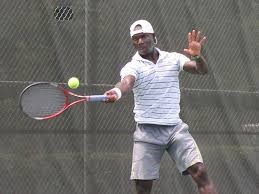 Pro Tennis Player Saves Himself from Dehydration and Credits NASA

Tim Kpulun was wilting in the Florida heat and humidity, about to run out of energy in the four-hour match, out of all his usual supplements to keep his body in balance, when he remembered the packs of The Right Stuff that a friend had given him. He took the NASA-developed hydration drink additive, called The Right Stuff® for the first time. He felt the power return, and went on to win the match.

For Tim Kpulun, who grew up in London, started playing tennis at age 7, attended Concordia University in Irvine, Calif., and went pro after his college success, tennis is life. At his parents’ urging in his youth, he switched from playing both soccer and tennis to concentrating on the individual sport. At Concordia, he lost only three matches in three years and realized he could pursue a career.

“There was a year where I went the whole season and I lost one match,” he recalls. “To do this is not easy. I thought, ‘I must be doing something correct. After I’m done, I’m going to give it a shot, put everything into tennis. I am a better tennis player than I was, that’s for sure. It’s made me a better competitor, a better athlete. It turned out to be life-changing I have grown as a person. This sport has designed me. The life that you have is all around this. It’s in your blood. It’s what you do.”

Living in Southern California, Kpulun relates to numerous leading coaches for advice about his game. He has ranked as high as 622; his ranking has dipped to around 800, but he is redoubling his focus and expects to advance quickly. At that level, matches are often in difficult venues and climates where matches don’t stop when the temperature reaches 105 degrees or more. Later this year, for example, Kpulun plans to travel to Cambodia.

“Some of the tournaments we play, they’re not in pleasant places,” he says, adding that The Right Stuff helps him succeed in such environments. “You have no choice. You’ve got to deal with the conditions. Everything there is to test your physicality. You need something to keep you. You need the best thing for you.

“I need this thing to survive those climates. I love Florida, but it’s humid – you’re sweating eating lunch, you’re dehydrated maybe in your sleep. I’m in ridiculously good shape, but it doesn’t matter what shape you’re in – if you don’t have the right thing in your body, you will break. For the conditions we play in, The Right Stuff®has been the best thing by a mile.” [Editor’s Note: Learn more at www.TheRightStuff-USA.com ]