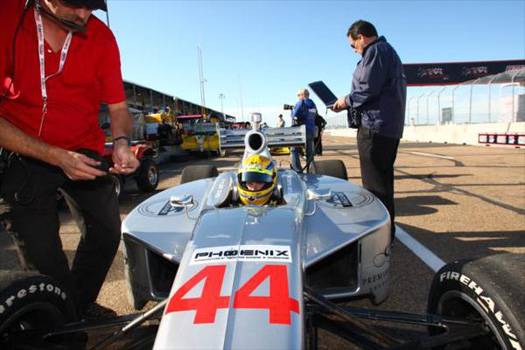 Dave Goree’s father sold his race car when Dave was born but quickly returned to the sport – the two were working on race cars by the time Dave was 14. “I fell in love with it and wanted to drive,” Goree says “It was difficult for me to get into sports car racing. I got into motorcycle racing. I’ve been back and forth between motorcycles and cars several times since then.”

In his 35 years in motorsports, he has won races and/or championships in every category except Indy Lights. He has also seen vast improvements in safety in the sport – from losing a driver every year or two in the past to intense focus on preventive improvements in the rare event of a fatal accident.

An ordinary highway accident in 2011 damaged Goree’s lower back, a worse injury than any he has suffered on the high-speed track, but he expects to drive again this season. “We’re building a Sprint car for me to drive and probably another one for an assortment of my friends to drive,” he says.

Starting His Own Team

Goree was chief engineer for an Indy Lights team when the

economy soured and the team disbanded in 2009. He started his own team and competed on a shoestring – carpooling with another team to a race in Canada, borrowing a Formula SAE team from a local college, and running an extension cord from the friendly team parked next door. The group stayed up all night making repairs after an accident on Saturday and placed 10th in the race on Sunday.

His Goree Multisports is mostly motorsports but includes bicycle racing and hopes to include equestrian competition. Outsiders sometimes fail to realize the high-level athleticism, both mental and physical, required for successful race car driving, Goree says.

“Formula car drivers are athletes. The physical demands those cars put on you is hard for people who have never driven one to imagine,” he says, listing g-forces and the hard-to-turn non-power steering. “You’re operating near your physical limits, and it’s such a mental game. Racing is 90 percent inside your head. It’s about ultra-precision – being that controlled operating at mental and physical maximum. It requires that your brain is perfectly hydrated.” [Editor’s note: Race cars do not have air conditioning.  Temperatures in the cabins often exceed of 120°F, significantly increasing the risk of driver dehydration which impacts their respond times needed at such high speeds]

The Right Stuff –  he’s seen how it helps drivers maintain focus and avoid cramping that can impair driving in the heat of a race.

“In my experience watching drivers, using The Right Stuff vs. when they don’t, especially near the end of the race – you can tell the difference during those the money laps,” he says.

[Editor’s note: For more information about The Right Stuff® from NASA visit www.TheRightStuff-USA.com]